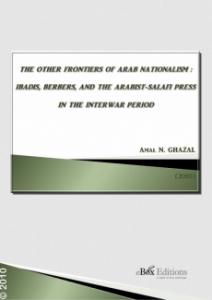 The other frontiers of arab nationalism

Résumé
GHAZAL N. Amal, THE OTHER FRONTIERS OF ARAB NATIONALISM : IBADIS, BERBERS, AND THE ARABIST-SALAFI PRESS IN THE INTERWAR PERIOD, 2010, 25 p.

Abstract
This article examines an Arabist-Salafi press network in the interwar period that operated between Algeria, Tunisia, Zanzibar, and Cairo and involved members of two sectarian communities, Sunnis and Ibadis. This Arabist-Salafi press network created a public sphere of intellectual engagement in which Salafism and nationalism were interwoven, producing a nationalist discourse transgressing post World War I borders of identity and linking the three layers of nationalism—the territorial, the Pan-Arab, and the Pan-Islamic—together. These layers not only intersected but also legitimized one another. Thus, this article not only expands the geographic horizons of Arab nationalism but also contributes to the scholarship examining the correlation between Islam and national identity in the interwar period.